President Carter's 1980 grain embargo has little affected Soviet food supplies and has destroyed U.S. illusions of "food power." The President suspended delivery of all U.S. grain sales (8M + tons guaranteed under terms of a 1975 bilateral agreement) to the U.S.S.R. in order to punish the Soviet Union for its military occupation of Afghanistan.

Due to extreme dry weather in 1979, the Soviet grain harvest fell short of production targets by 21%. Its decision to import grain was due in part to maintain the size of its livestock herds. The largest share of these grain imports was to be supplied by the U.S. Other major suppliers were less prepared due to record demand, poor harvest, and transportation problems, giving the U.S. the advantage of food power.

Any effective exercise of food power requires an unbroken chain of favorable developments, in three distinct areas at the same time. An embargo that fails at any one of the three will fail altogether. First, within the political system of the nation seeking to exercise food power (U.S.), foreign policy officials must be able to maintain control over the volume and direction of their own food exports. Second, within the bounds of the international food trading system, other countries and transnational corporations must be prevented from "leaking" embargoed U.S. grain into the target nation. Third, within the political and economic system of the target nation (Soviet Union), the intended reduction in food imports must be adequate and appropriate to produce the desired effect.

The President's 1980 embargo has failed to meet this strict requirement for success.

Farm state opposition to the embargo did not materialize for months and farm lobby groups tentatively endorsed President Carter. These groups had assumed President Carter would never dare to interrupt U.S. grain sales to the Soviet Union. Initial resistance came from the International Longshoremen’s Association, which announced it would block all further exports to Russia; the ILA was later persuaded through private arbitration.

The embargo policy achieved early success at home due to the 1979 Export Administration Act, momentary patriotism and deference to presidential leadership, and compensation extended to U.S. grain producers and exporters affected. Support of farmers and grain exporters was gained using the Commodity Credit Corporation to assume contractual obligations of exporters for undelivered embargoed grain. By midsummer, the CCC managed to "retender" most of the grain back into market channels.

Producers became concerned about depressed farm prices. Government "loan prices" for wheat and corn were increased, to guarantee producers more for the grain, which they can pawn to the government. "Release" prices were also raised, to allow market prices to increase before surplus grain could leave reserve. Other increases: compensation for grain storage, "farm-owned reserves," and interest costs on grain entering that reserve. Despite these measures, 1980 farm prices did not keep up with production costs, and farm support for the embargo began to falter. The American Farm Bureau withdrew its support for the embargo in April. Legislation to end the embargo was introduced in both Houses.

The President's budget-cutters insisted that there be no paid "acreage division" program for either wheat or corn in 1980. Without acreage diversions, plantings of spring crops offset the bad summer weather, containing prices just enough to stimulate new demands for federal help, and fueling discontent with the embargo.

The grain embargo would require an awkward act of termination accompanied by the obligation to permit a limited renewal of U.S. grain deliveries to Russia in any case.

Domestic grain producers doubt the Soviet Union will ever again make plans to buy so much U.S. grain. They expect to be compensated by taxpayers for the continuing damage they claim to have sustained. U.S. grain producers tend to exaggerate the damage done to their export opportunities by the embargo. Farmers have sought to use the embargo as justification for gaining federal assistance.

It is at the second point at which the embargo has been prone to failure. Food power exercise must survive against leaks and competing suppliers must not redirect their own grain sales to the Soviet Union. Also, the diplomatic cost must not outweigh the benefit.

Transshipment of U.S. grain was the first and most obvious threat to the embargo in the international arena.

One broad avenue of transshipment was through Eastern Europe. Import total grew despite improved East European harvest prospects. Two-thirds of these imports were feed grains, exactly what the Soviets wanted most. Expanded sales of U.S. grain to Eastern Europe were permitted to continue, inviting leakage and irritating Canada and Western European suppliers.

Adding to transshipment, the five largest private grain trading firms have a reputation for discretion and ingenuity when it comes to servicing the needs of their largest and wealthiest customers, most notably the Soviet Union. By offering premium prices, the Soviet Union made it worthwhile to other grain-exporting nations to redirect their grain exports away from traditional customers and toward the Soviet Union.

Giving in to pressures from its own grain producers and exporting organizations, Australia could move into position as second-largest wheat exporting nation if it continues its expanded grain sales to the U.S.S.R. Canada’s grain production and export organizations have been openly resentful of this year’s embargo restrictions upon larger sales to the Soviet Union and has allowed its sales to the Soviets to increase by about 50% in 1980. The EC expanded sales to Russia within a month of the President’s embargo announcement.

If the embargo continues, it will be further weakened by sales from several other Southern Hemisphere food exporters.

India has provided to Russia in repayment for an earlier Soviet wheat loan and in barter for Soviet oil.

Markets abandoned by competitors, in a haste to sell to the Soviets, have been filled by the U.S. The hasty buy-up of embargoed grain stimulated the U.S. to establish a much needed food reserve to meet emergency needs in poor countries. It has also made the participation of the Soviet Union in a multilateral food reserve system far less likely.

For the embargo to continue, its many leaks should be allowed to continue as well so that the diplomatic cost does not outweigh the benefits.

The purpose of the grain embargo was to punish the Soviet Union for its invasion of Afghanistan. The embargo would have been a success if it had managed to damage the Soviet livestock industry.

In the very short-run, if denied access to imported feed supplies, the Soviet union might have been required to conduct “distress slaughter” of livestock. The design of the 1980 U.S. grain embargo was to trigger a disruptive cutback to Soviet livestock. But the embargo has failed in this objective. Even if the embargo had not leaked, the Soviets might have been able to meet much of their short-run need by removing grain from their own reserves.

In the longer run, a well disciplined grain embargo could do serious and lasting damage to the Soviet livestock industry. Bad weather will sooner or later strike when stocks are low.

The longer any U.S. embargo continues, the more likely it becomes that new sources of supply will emerge. Argentina is the obvious candidate to take over.

Long-run success of the embargo would be doing the Soviets a favor. It provides an excuse to rethink its agricultural objectives. If the embargo had continued without leaks, it might have provided the opportunity to the Soviets to abandon their costly meat consumption program without having to admit to their own people the failures of state farming.

A tight embargo might not force the Soviets to spend more on agriculture and less on arms. With a return to confrontation, austerity might well be accepted as a patriotic duty.

The grain embargo must have appeared as more attractive than the alternative, which was to continue with plans to sell in 1980 an all-time record 25M tons of U.S. grain to the Soviet Union. These sales would have proved embarrassing to the President and raised doubts about his capacity to make hard decisions. The embargo was not so much a serious mistake as an unhappy necessity.

And end to the embargo would not restore the status quo ante. The recent intensification of superpower rivalry is only one part of the grain sale problem. The U.S. suffered from exposing its food and farm economy to the disruptions caused by “hit and run” Soviet purchasing tactics. The Soviets suffered whenever U.S. fears of an untimely sale led to surprise export interruptions. Even with the 1975 bilateral agreement, U.S. farmers, traders, and policy officials went into every season with few clues of what to expect from the Soviet market. The Soviet Union will shun a renegotiation of the grain agreement as long as the embargo remains in place.

If the Soviets should decide to slow the growth of their own grain imports, then questions of enormous U.S. sales to the Soviet Union might not arise. 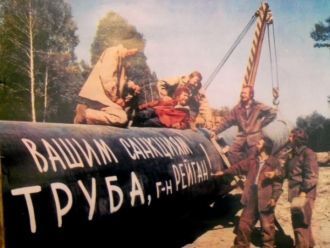 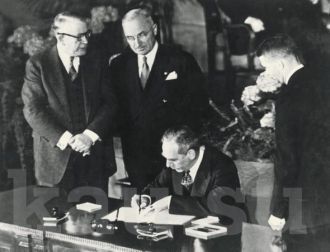 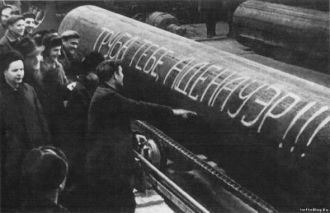 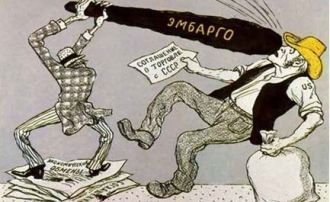 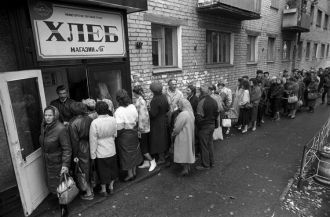 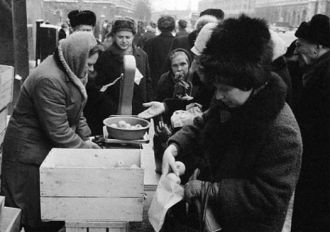